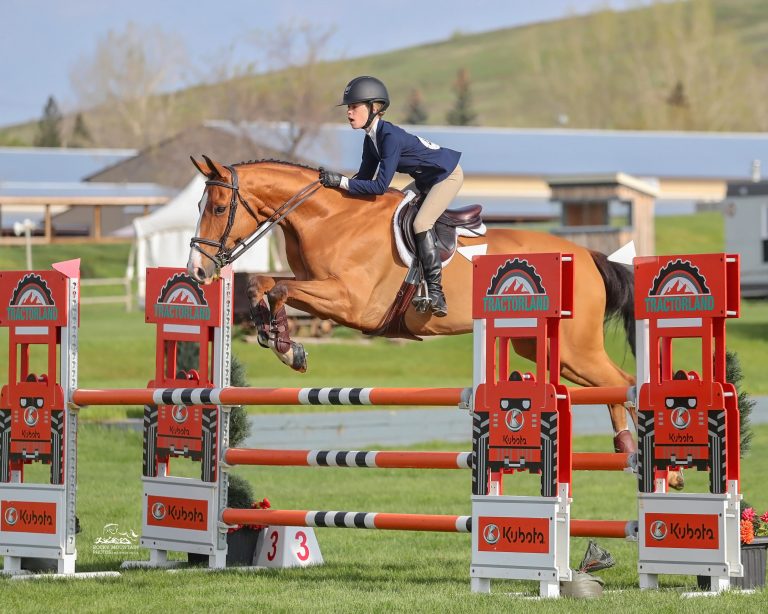 Congratulations to Trista Sillers, our Jump Alberta Rider of the Month for August!

“My name is Trista Sillers and I ride Scribble SM (Scribble), a 12 year old 16.1hh Hanoverian.

My favourite Jump Alberta shows are the Rocky Mountain Classics because it’s during summer and there is nice weather. I also enjoy watching the big classes and riding in the grass rings.

This show season season was my first with Scribble, we moved up from the .90m to the 1.15’s so far. Some big moments for me are Scribble & I winning champion in my first 1.10 and 1.15 divisions, riding in the grand prix ring for the first time ever this year and winning our first CET!

Scribble is a very funny horse – he loves to nibble on everything and anything possible! He also loves to smile, loves attention and is always a super fun ride. I look forward to the rest of show season and making more memories!” 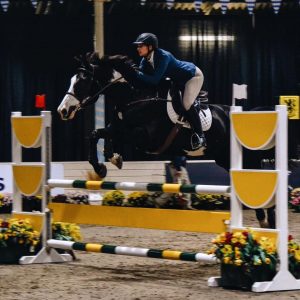 Our featured rider for June is Becky Knickle and her gelding is named Bay Bayou (known as Maverick). He is a 15 year old thoroughbred with the biggest heart Becky knows. If he was a Disney character he would probably be Winnie the Pooh as he loves his snacks, always has a cheerful attitude and always tries his best.

As Becky and Maverick are still a new team, they have not had the opportunity to visit all of the Jump Alberta shows just yet, but competed at the Spring Welcome this year at Amberlea Meadows and had a wonderful time! Becky looks forward to ending this year’s show season at RMSJ. Maverick can be pretty cheeky at times: his favourite funny quirk is that he cribs on his tongue.

“He’s a silly fella but I love him to pieces!” says Becky. 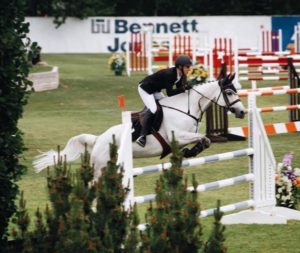 “Having only riding for four years now, competing and riding at the level I am at now was never thought to be a possibility when I first started doing x rails three years ago. Jumping my first 1.40 this year was a huge success – I placed third!”

Cayden’s biggest accomplishment is winning the 1.35 classic in thermal this past winter – it was a huge class and Cayden’s horse princess stepped up her game and they tackled to course like they’d been doing it for years, even though it was their second 1.35 class ever.

Cloud 9 (Princess) is a 13 year old 16.1 Dutch Warmblood/TB mare and she is really quite a princess – she’s very cranky towards everyone except Cayden. Princess is a lot like Zazu from The Lion King, says Cayden. She’s a fighter and often strives to do her best and what’s asked of her.

Next year, Cayden hopes to move up to the 1.45s and go to Young Riders as well as jump some smaller grand prixs and compete in Florida. 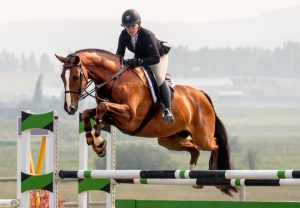 Bianca is most proud of competing in the CET Finals for the first time this year and placing 7th in the jumping phase with a horse that had never done medal classes before this summer. Bianca also won a 3’6 Jump Canada Medal class this year.

Her favourite show memories from the 2018 season are training and showing with her new horse and learning so much from her amazing trainer, Lindsay Beadle. Competing in the RMSJ Grand Prix ring and coming in 2nd in the 1.10m Mini Prix and showing at Thunderbird for the first time also make the list! 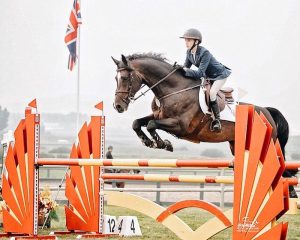 Devyn is most proud of winning her first 1.15m classes recently. Her favourite memory of the 2018 show season was her very first horse show with her new horse! Dutch Boy is a 10 year old, 16.2hh Fur H Warmblood.

Devyn compares Dutch Boy to Nick Wilde from Disney’s Zootopia. Just like Nick, Dutch Boy is super cocky, funny, and pretty chill when a crisis is happening! Devyn has set her next goal of working towards the 1.25m jumpers and the CET medal.

We received the sweetest nomination for our May Jump Alberta rider of the month:

“My name is Anna and I would like to nominate my sister Katya Shepherd and her horse Set Sail, aka Connor.

Her favourite JA show is Jump for Hope because it supports such a worthy cause and she has had family members who have been affected by the disease. It is also an event that practically her whole barn goes to and all the ribbons are such gorgeous rainbows.

The funniest thing that Connor does, by far, is how he smiles before and after people feed him treats, of course the smile after is in hope of getting more peppermints. My sister works so hard and I think she truly deserves this.”

Thank you so much for nominating your sister, Anna! Congrats, Katya!